Fonda made this post available for free. Say thanks by sending her a tip.    Send Tip

From the author: If you don't write fast first drafts, that's okay.

It’s November, which means that quite a few of you have just a few minutes to read this guest post before cracking your knuckles, shutting down your browser, and getting back to pounding out the 1,667 words you need to squeeze from your gray matter today if you hope to stay on track to hit the lauded “Look Ma, I Wrote a Novel!” goal of 50,000 words this month.

I’m not participating in NaNoWriMo this year. That’s because my novel, Jade City, releases next week and I’m kind of insanely busy with that. Also, I flat out suck at NaNoWriMo. I’m currently writing what will be my fifth published book in five years, and I have never once successfully “won” the damned challenge. In fact, I was on this very blog at the beginning of the year talking about how my second novel, Exo, started out as a failed NaNoWriMo project.

I’m in no way unhappy about this; six years ago, I might’ve taken it as a depressing sign that I couldn’t be a Real Author, but by now I know I’m capable of sticking to a writing schedule and finishing novels, and I don’t need the valuable kick in the pants that NaNoWriMo offers to thousands of writers every November. (My editor’s deadlines do that for me just fine.) I would never begrudge anyone the camaraderie, energy, and motivation that NaNoWriMo can inspire.

That said, it’s important to recognize that NaNoWriMo promotes one particular strategy—fast first drafting—that does not work for everyone. It doesn’t work for me. And if it doesn’t work for you, that’s fine. Take it from me, it’s possible to be a Real, Published – even, I dare say, Reasonably Prolific – Author without adhering to a lot of the advice you’ll hear this month.

Jade City took me two and half years to write. It’s an epic gangster fantasy saga, the first in a trilogy to be released by Orbit, that’s been described as “The Godfather with magic and kung fu.” When it went out on submission, it sold in less than three weeks. Here’s how I wrote it.

WAITED UNTIL I WAS GOOD ENOUGH

The first notes I have in my Scrivener files for Jade City date to mid-2014, roughly a year before my first novel, Zeroboxer, was published, and the ideas behind the story had been percolating in my brain well before that. I did not, as some might’ve suggested, dive with squealing gusto into my exciting, shiny new idea. That’s because I knew the story was in a league above my abilities at the time. I could write novels—novels that sold and even won awards—but Jade City would require me to level up in terms of storytelling, worldbuilding, character, plot, everything. So I began slowly—researching, outlining, writing—and wrote two other books in the meantime.

Fortunately, writing my young adult science fiction novels and going through the editorial and publishing process with them taught me how to write tightly-paced, single POV narratives—something that absolutely helped me to stay focused when wrangling a multi-POV epic fantasy. It’s tempting to jump at your most ambitious idea—but ask yourself if you can do it justice. Yet.

I normally don’t show anything to beta readers until I have a draft of a complete manuscript, but I broke that rule this time and showed the first six chapters to a few readers. The reaction was mixed. A few were unreservedly enthusiastic and exhorted me to continue. A few thought it had promise but wanted me to change the beginning. One reader, however, hated it. Hated my characters, my story, hated it all. That reader basically told me, in a nutshell, to burn the fucker.

Thank heavens I didn’t listen. Oh, by the way, I changed the beginning. Agonized over it too, writing and rewriting. My agent said, “What in the hell did you do that for?! Change it back to the way it was.” I changed it back. It sold that way, with my original beginning. Last month, Max Gladstone told me that he used my book in a class he taught on effective beginnings.

Critique groups really are invaluable. Except when they’re not. Readers, like reviewers, are going to give you mixed feedback, but there’s a chicken-and-egg conundrum going on here of, “I need critiques to learn to write well, but I need to know how to write well to be able to effectively judge my critiques.” Early on, everyone tells you to get a critique group, and it’s true you need feedback—but you need the right feedback, from the right readers, always balanced with your own artistic judgment, experience, and vision. It takes time to gain all of that.

I have what feels like a dirty secret: I write slowly. You know how some writers do word sprints where they shoot for a thousand words an hour, or aim for twenty thousand words in a weekend? I’m not that person. On a normal writing day, I write one to two thousand words. It takes me between three and eight hours. For quite a while, I imagined there was something wrong with my process, that if only I outlined more, or “shut off my inner editor,” or used an Alphasmart Neo, or reread 2K to 10K once more that the words would begin to flow from my fingers in a torrent.

I’ve since given up on that ambition. Not because I don’t want to be more efficient; I do—namely by finding a way to shut off distractions like social media and being in the right positive mindset when I sit down to work—but I discovered that, paradoxically, as I became a more experienced writer, I wrote slower. My standards kept getting higher, and I have a much lower tolerance for going off in random directions and spending precious weeks wandering in my own word swamps when I’m on deadline. My friends who swear by fast first drafting can finish a draft in six weeks—and then spend months or years on multiple rewrites. By my second or third draft, my manuscript is damned clean. We all pay the piper in some way; you choose how. I wrote Jade City like a blind mountain climber scaling Everest: slowly and methodically searching for each handhold, stopping to rest, unable to see the summit but always going up.

TOOK A LOT OF LONG BREAKS

I set Jade City aside at least three times. There was a reason for this: I had deadlines on other books. But also, there were times I simply could not see how to make the words on the page match the glorious vision in my mind. In June of 2016, I hit a roadblock. I’d revised and revised and even though the thing seemed complete and it all hung together, it was still not quite what I wanted it to be. It needed 5% more of something—I didn’t know what.

I gave up for the time being. In fact, I spent the next five months writing another book. When I returned to Jade City with fresh eyes, it was miraculous: all the changes I needed to make popped like neon flags. There is truly no substitute for not rushing. So, if you’re planning to submit your NaNoWriMo project to agents or editors in January? Yeah, rethink that idea.

BROKE A LOT OF RULES

Would I have tried any of that on my first novel? Hell no.

I’ve come to the personal conclusion that if I’m one hundred percent certain that what I’m writing is saleable and marketable, I’m probably not pushing myself enough. At the time that I was writing Jade City, I could not think of any comp titles to “modern era Asian mafia epic fantasy magic martial arts family saga.” Not a one. I decided there was a chance that the market for this book consisted of one individual—me—but dammit, it was exactly what I wanted to read. I told myself many times that even if it never sold, I would still be awfully proud of it.

I’m not advocating that you go off and write the weirdest, most potentially unsaleable idea that you have, but rather: don’t be held back from writing the book that burns brightest inside you. Take your time if you need to. It might not get you that agent or book deal—this whole writing business is unpredictable—but the odds are honestly pretty good that there are people out there who share your sense of awesome, and your passion for the story will come through on the page.

So there you have it: an antidote to the relentless urgings to write with abandon, spew words onto the page, hit word count every day, just get that first draft done as fast as you can! You can take your time, build your skills, and write toward your singular vision slowly and in stages. If NaNoWriMo works for you, fabulous. If it doesn’t, fabulous. Like me, you can stink at it year after year and still end up with a bunch of books to your name. Don’t confuse speed for progress, but also don’t make excuses to let yourself off the hook from getting shit done. Often, we writers are like competitors on the Great British Bake Off comparing kitchen gadgets and recipes and proving technique when the only relevant question is, “Is the cake done and does it taste good?”

Fonda made this post available for free. Say thanks by sending her a tip.    Send Tip 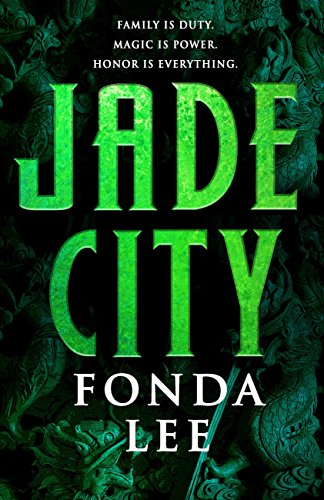 Book One of the Green Bone Saga. The World Fantasy Award-winning modern-era epic fantasy novel of family, honor, martial arts, and magic. The powerful Kaul family faces clan war for control of the magic jade that will determine the fate of their island country.