Jennifer made this post available for free. Say thanks by sending her a tip.    Send Tip

Excerpt From The Lay of Lady Percival

From the author: This is an excerpt from my Arthuriana novel, "The Lay of Lady Percival." Our heroine is seeking acknowledgment from Arthur for herself...and for Arthur's bastard son. Needless to say...

The toddler stopped, but punctuated it with, "No."

She had chosen a British name for her son. Perhaps it was because they had to be British now, not Roman. Perhaps because she did not want to remember the other half of his heritage.

There was much of Arthur about his features, although he had his mother's dark hair, sure to be black before he matured. She quickened her pace, caught him up in her arms. "Do you want to see the warlord or not?"

He squirmed, but briefly. The warlord. The man the tribes had chosen to lead their united warband. Dux Bellum, the Romans would have said.

His name flowed through her mind and almost reached her lips. Arthur. It could not be her Arthur, yet...the name was the same. How rare a name was it? Rare in Britain, yes, but not in the lands of the Norse and the Dane and the Saxon. Thor was one of their gods.

He had been named after a god, just as she was. Yet, had he stayed, he would have come to her on that clifftop. Had he stayed, she would be at his side now, and Gwydion riding on his shoulders.

For a moment that vision was clearer than the reality. The one servant she had brought helped her clear a way through the crowds.

He would be acknowledged outside the Cathedral, a nod to the Christians. That was not how it should be. They should be in the great royal circle of Avesbury, not that teeming city, diminished yet still vibrant.

Yes, there they were on the steps, the most important of the royals of Britain, gathered. She should be with them, her blood was as good. Something about her urgency was picked up by the crowd, who parted, leaving a clear route to the center of it all.

Gorlois of Lyonesse, his wife Ygraine and daughter Morgan. Lot of Orkney, with his wife, Gorlois' sister Morgawse...once considered the most beautiful woman in the land. Their two sons...Gawain and Galahad, the latter barely fourteen. And Leodegranz of Wales with his daughter, the fair Guinevere.

She knew she should not, but nonetheless she let her track drift to the edge of the group.

A white horse came through the crowds. It bore a figure in armor akin to that a Roman general might have worn, but a longsword rested at his side.

The warlord dismounted and removed his helm, and her heart skipped a beat. "Arthur."

His eyes turned to her, lingered, and then glided away. It was almost as if he did not recognize her.

No, his eye had gone elsewhere once it had rested not on Persephone, but on Gwydion. It was the child he denied, and the mother with him.

Then he turned to face the Kings. The Bishop of London stepped out onto the steps, where the highest of the druids, Merlin, should have stood.

"Arthur," he greeted. "Do you truly take the charge of leading our defense?"

"I do." His eyes were entirely on the bishop now.

Persy's were entirely on him. As were Gwydion's, the boy too young to understand but fascinated by the ceremony.

It was Morgawse who interrupted. "The Christian kings will accept him. But for those of us who follow the old ways, we want more."

Arthur turned towards her.

"If this man is to lead above even the Kings, he must be bound to the land."

"Meaning?" That word came from the bishop, and in it sounded a volume of disaste, every aspect of his tone and the shift in his stance revealing that he wished nothing of such pagan rites.

"He must wed a woman of our royal line." Morgawse's eyes fell first on Morgan, then on Guinevere, then, after a long moment, on Persephone.

She bit back 'He already has'. Why was he betraying her? For his eyes did not move towards her.

Instead, he regarded the two other women, one dark, one fair who faced him. And she knew the truth of his choice. Morgan was as pagan as they came, rumored to be both a powerful witch and priestess of the terrible Morrigan. Leodegranz was Christian, as, one could presume, was his daughter.

"Then, I will wed Guinevere of Wales."

Hatred and confusion boiled up within Persephone's heart. She would see him brought down. She would...

...she could not. Without one unified leader, they would fall. So, instead, she stood there, watching.

Watching as he vanished into the church. Then, she understood. Arthur had converted to Christianity. A wife named after a Greek god could be nothing but an embarrassment to him and a bastard child could only be worse.

Yet, he owed her. Could he not see that?

She vowed to speak with him, before he could wed fair Guinevere. She had one thing that delicate, blonde woman with the slender hips did not.

She had his son.

The next day, Persy considered leaving Gwydion with the servants. Yet, he was her one weapon.

Did she really want a man who so deserted her? Not exactly, not any more. But if she simply dismissed her own claim, then she could gain nothing. Besides, it was not for her, now, but for her son. A man needed to know his father.

The morning was typical for Londinium, fog having settled over the valley in which the city rested. She kept Gwydion on her hip despite his weight, the mist swirling around both of them. The air weighed her down and the faint smell of too many humans too close together reached her nostrils.

The streets were already beginning to fill up. The city had shrunk, but not significantly. It would take a sack akin to what had happened to Rome to drop the number of people to reasonable levels. As the fog faded to thin tendrils, the colors of their garb assaulted her. She even saw a group of Scotti in their brilliant wool togas...kilts, they called them. The rest mixed Roman and British, as they always had. Sometimes on the same person.

She was herself no exception, a simple wool dress covering her form under a faded Roman palla.

Arthur was staying in a rented town villa, one that had once belonged to some Roman functionary. His choice had been made clear, the new ways, over the old. She feared that the old days altogether numbered. She had paid them lip service while the Romans had required it, but once they had gone, returned to giving honor to her namesake.

What would Gwydion do? What gods would he serve? If he did have a place with his father, then could he balance the two?

But she would rather lose him to the new religion than have him grow up not knowing his bloodlines. Not knowing an important part of who he was. What could she say or do if Arthur did not wish him to know him?

By the old ways, Gwydion was legitimate. To the Christians, he was a bastard. Perhaps that would be the final test.

The villa was neither modest nor grand. A manservant stood in the doorway. "Can I help you?" he asked, in tones that indicated he intended nothing of the sort.

"Persy." She gave the short form of her name. Did he still have the right to use it? Could she truly deny him? She remembered the feel of his body and ached for him for a moment.

Did she still love him? Perhaps.

"I will find out if he wishes to see you." The servant vanished, and then Persy saw who was behind him.

Guinevere wore white, and so fair was she that no color seemed to adorn her. A silver torc encircled her throat. She had her pale gold hair loose, as befitted a virgin. Her eyes heaped scorn on the woman who was so obviously not one. An ironic thing, for she should not be here, spending time in her betrothed's temporary residence before they were wed.

"Princess," Persy greeted. She was unsurprised by the woman's visible scorn towards her, even though they were of equal rank and blood.

"I'm afraid I don't know you." It sounded like she did not care to.

"Persephone Caracti," she introduced herself.

A golden eyebrow lifted momentarily. "And where is your husband?"

Persy answered with a smile, feeling the woman's distaste. "That is what I am trying to establish."

"What are you implying?" Guinevere's voice carried with it the accent of Wales, the heavy breath instead of the l.

"I need to talk to her. Jenny, enough. I'll explain later." His voice came unexpected, a moment before the man himself stepped around a doorway and came into view.

Jenny, he called her, as if he had known her all of his life. Under his gaze, though, she left, leaving the two of them standing in the atrium.

"You were not exactly a suitable bride. Even less so now, I see."

Suitable... "I am a princess of Britain."

"A pagan princess." Then, a softness came into his words. "I'm sorry, Persy. I feared even then that I would have to...placate...the Christians. Guinevere is the only woman who can allow me to do that, and I most certainly cannot marry a woman who has a bastard child."

She exploded. Her anger almost carried her into him, almost caused her to resort to fist or knife. "He's yours, you idiot."

She had set Gwydion down. Fortunately, he paid no attention, distracted by a display of flowers set within the hallway.

"Don't you dare apologize. What if I tell your perfect princess..."

"What of it? You know that they always consider these things the woman's fault."

Her look became a glare. "To think I once loved you."

He softened once more. "I did love you. Past tense. I thought a clean break was better. I thought..."

"You didn't think. Fine. I'll vanish and you'll never have to look at me again." With two steps she scooped up Gwydion. "Or him."

It was the only sanction she had, but if he did not acknowledge the boy then she would find a father worthy of the name. Or she would win Arthur back. There was, at that point, no possible compromise. No middle road.

Even after the way he had treated her, she still wanted him.

Jennifer made this post available for free. Say thanks by sending her a tip.    Send Tip 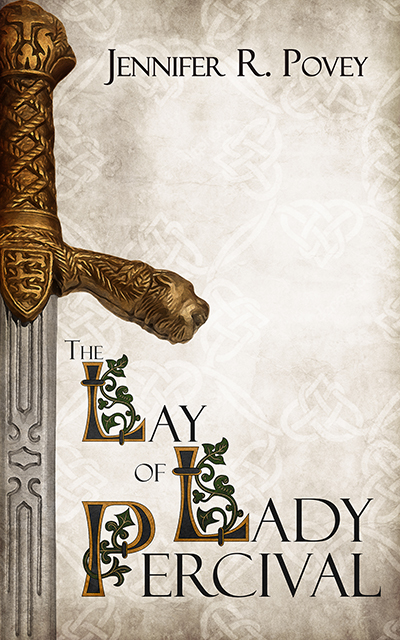 The Lay of Lady Percival

Rome has fallen and the eagles have flown. Left alone with her child when her lover, Arthur, leaves these shores, Persephone finds her world changed when he returns - as war duke and then King of Britain. She has the one thing he needs: His son. But he will not accept her as herself. Thus is born the legend of Percival.

Everything from epic fantasy to stories for Analog.