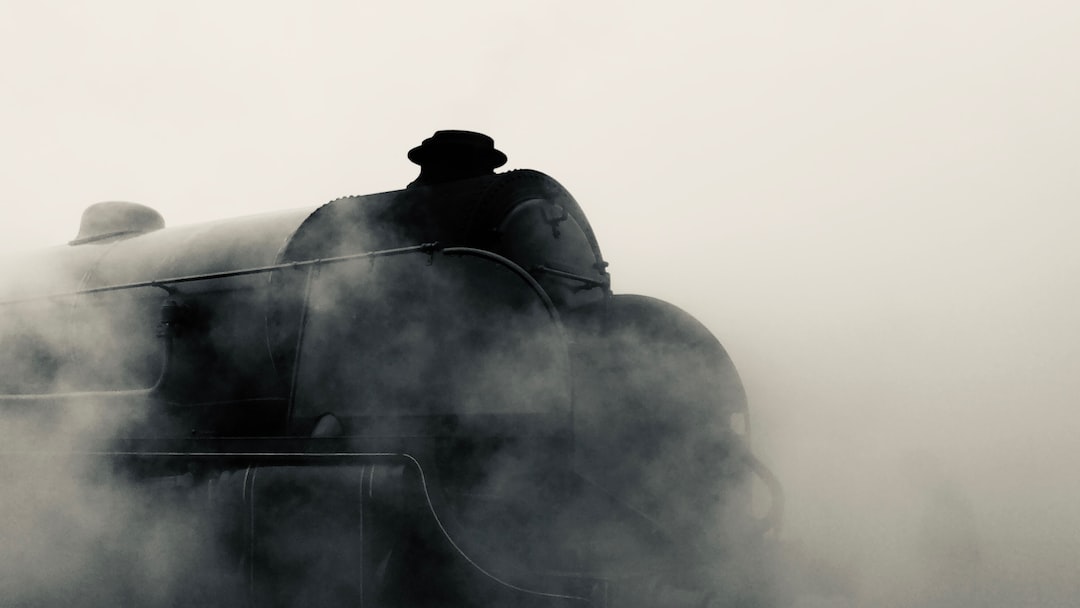 Photo by Adam Bignell via Unsplash.

Roil, part one of the Night Bound Land, was the novel that taught me how to write novels, and for that it will always have my love.

But it’s a kind of difficult love because it was the book that swallowed nearly a decade of my life. It ended up finding a home with Angry Robot a year after I sold my first novel, which was a very different sort of creature.

It’s a big, loud book about the end of the world, and darkness and monsters. It’s steampunk, and eco-catastrophe, and large set-pieces all of which I had never attempted before. It’s dark and wet. It’s tempest-tossed, and worried at, and a little over-cooked. I was barely holding on when I wrote it, slamming so many contradictory bits together, smoothing it out, hoping it was entertaining, that it worked.

Look, I don’t know if it did. My more recent writing has been quieter. But there’s something about letting rip, throwing out the ridiculous world-building onto the page, going a bit crazy with it all, and having the liberation of all that space, particularly when all you’ve really written to completion are short stories, none much longer than five thousand words.

It's the book I had to write, and it is wrapped up in so many memories, particularly my writing group ROR, and a whole bunch of things other things too, that make up our lives amongst the writing, and which you’re not even aware of until after the fact. Nothing remarkable, but all very much part of who I was and am.

This is a little bit of that first book, and also the first thing I ever read in front of an audience, though that happened many years before Roil was published.

It's good to go back to a time when I was much more confident that I could write something worth reading. I'd sit down, and tap away, pretty sure that what I would write would find a home. These days it's not quite so easy, but it's a fine thing to be reminded of.

The Night Bound Land and Roil in particular taught me so much, I don’t know if I’ll ever go back to Shale and the cities drowning in the Roil, and the angry mayors and weird drugs and even odder monsters, but I glad I went there for a while.

The railway had ever been the transport of the middle and lower classes: flight is not cheap.

When it declined the world shrank for many. So, too, did the threat of the Roil. That which is beyond the horizon may as well be another world.

Edwards and Leer – The Dialogue of the Tracks

The stationmaster of the Southern terminus despised the seven days of Halloween, the heat and the faux haunts, but he dreaded the nights, and night was coming, from the east and from the south. Night and the Roil were coming.

He stood upon the edge of the southernmost platform and stared south, through brass binoculars greasy with

his fingerprints. He lifted his gaze past weed-drowned marshalling yards, crammed with carriages given over to dry rot and rust, focussing on the obsidian curtain, the point where the Roil rose into the sickly, luminous sky.

It flexed and bulged, ripples of concavity and convexity played ceaselessly along its face. The damn thing was hypnotic. But then, how could the end of the world be anything but hypnotic?

He fished in his pockets for the most recent letter from his wife, and when his hard fingers closed about the soft paper, he found some comfort. He did not read the letter. He had memorised every word. He yearned for her touch. But doubted he would ever know it again, nor hear his children's laughter. Each letter had become a whispering domestic hope and a terrible rising dread.

Things had been different when he started this commission, no Southern terminus then. Multiple lines had branched from here and, almost on the quarter hour, the tracks sang to a train's approach. The Dolorous Grey, the Eastern Line Galvin, the Consolation City Four or the Southern and Western Suburb's Clattering Eights.

Now they serviced the Dolorous Grey alone. By the time the eight wheeler reached the Southern terminus all the passengers had disembarked, and there were only empty carriages to clean and the dim hope of mail and the even dimmer hope of orders to return north.

The line extended south but ended in darkness and no train had come from there in years.

No train from the south, but over the last year, as the Roil closed the distance between itself and the station, other stranger, crueller rolling stock had followed the tracks. They did not come when the winds blew cold from the Ekalb Mountains in the North, but when the winds were hot and from the south, and those days were ever on the increase, they washed in; drear and dangerous driftwood carried on some bleak tide.

'Hot night,' came a voice from behind him.

Startled, the stationmaster jumped, his heart pounded and rattled in the cage of his ribs. But he did not turn around, just refocused the eyepieces of his binoculars. There was Chill in the office. He’d never thought to keep some with him.

'Where have you been, Jeremy?' he asked, his voice cracking. 'We believed you dead.'

'I've been away. Hunting. Or so I thought. It's the merest slip twixt cup and lip `til the hunter becomes the hunted.'

The stationmaster jerked around, raising the binoculars before him like a shield. 'What are you talking about?'

Jeremy grinned, a wide and terrible grin. An actor's grin, or a m

is the issue here, the draw and the reasoning; furnace heat, blood heat. The Roil told me, in its loud old voice. Can't you hear it?' His smile grew and grew and it came spilling from his mouth, dark and frangible, a softly hissing shadow; moth like they fluttered. So many of them, the man must be filled with them 'Witmoths,' Jeremy whispered. 'Thought and madness and command.'

The stationmaster stepped back. Too late, of course, but it had always been too late. You can only watch the end of the world for so long before you get caught up in it. He took another step backwards.

The Witmoths struck at his eyes and ears and mouth, and where they touched burned with a pure and terrible agony. His head filled with noise, louder than the thick, stupid racing of his heart. He tried to scream. The moths poured through the useless split of his lips, crammed it with fire. He bit down on his tongue, blood rushed into his mouth and the moths found another portal to his brain.

The binoculars dropped from his fingers, and he dropped to his knees after them, scrambling towards the brass tubes. But no salvation lay there, only mindless grasping amidst the cloud of stinging moths that followed. His wife's letter fell free and the stationmaster swatted it across the platform. He raised his head and howled. Or tried to.

No sound came, just darkness, from his mouth and eyes.

Cognisance fled, drowned out by a voice: dim, distant, and old.

Get to your feet. It's still too cold here.

He rose unsteadily. The binoculars lay on the platform, one lens cracked, a dent marring the left barrel. He kicked it over the edge.

'You're right,' the stationmaster said, bending to pick up the letter, and slipping it into his pocket. 'Hardly ... hardly hurts at all. Now, let's get out of this cold.'

The clock had just struck two when the Dolorous Grey arrived at the Southern Terminus. Despite the late hour, it was still sweltering hot as the driver and his crew disembarked. The moons Tacitus and Argent were both low on the horizon, and the stars were dimmer than the driver remembered them.

He shook his head. No matter, they would drink their tea and eat their biscuits, stoke up the engines, clean the carriages, and head North again and the sooner the better. The Southern Terminus was one rest stop that his staff was happy to see truncated. He did not blame them.

He hated being this close to the Roil.

Deserted suburbs surrounded the station. Once these areas had been bustling and crowded and had names like Willingvale and Worryon. Now they were a ghost city, serviced only because the Council demanded appearances be kept up.

Like most people of Northern Shale, the driver preferred to give the Roil as little thought as possible. It was all too much. Of course, it was easier to avoid such dark thoughts in his offices in Mirrlees. However, this far south it was impossible.

The Roil permeated everything and with every trip its presence increased, darkening not just the sky but people's souls as well. Down and up down and up. He'd gone this way enough times to feel it there, that awful dread which would rise and build with him with every mile. For North or South, he was always coming here, always returning.

He prayed he was not around when the Roil crossed that last mile. The Grand Defeat was still a fresh memory for him; he had lost his father there and an older brother. Damned if he was going to let the Roil take him as well.

The stationmaster, dressed in his greatcoat, as though it was the middle of winter, came out of his office, whistling cheerfully. Odd, the fellow was at the best of times a grim duck.

'Ted, why is the furnace blasting?' The driver asked, wiping sweat from his brow, and pointing at the fuming chimneys.

The stationmaster smiled a wide tenebrous smile and showed him.