Becca and the River 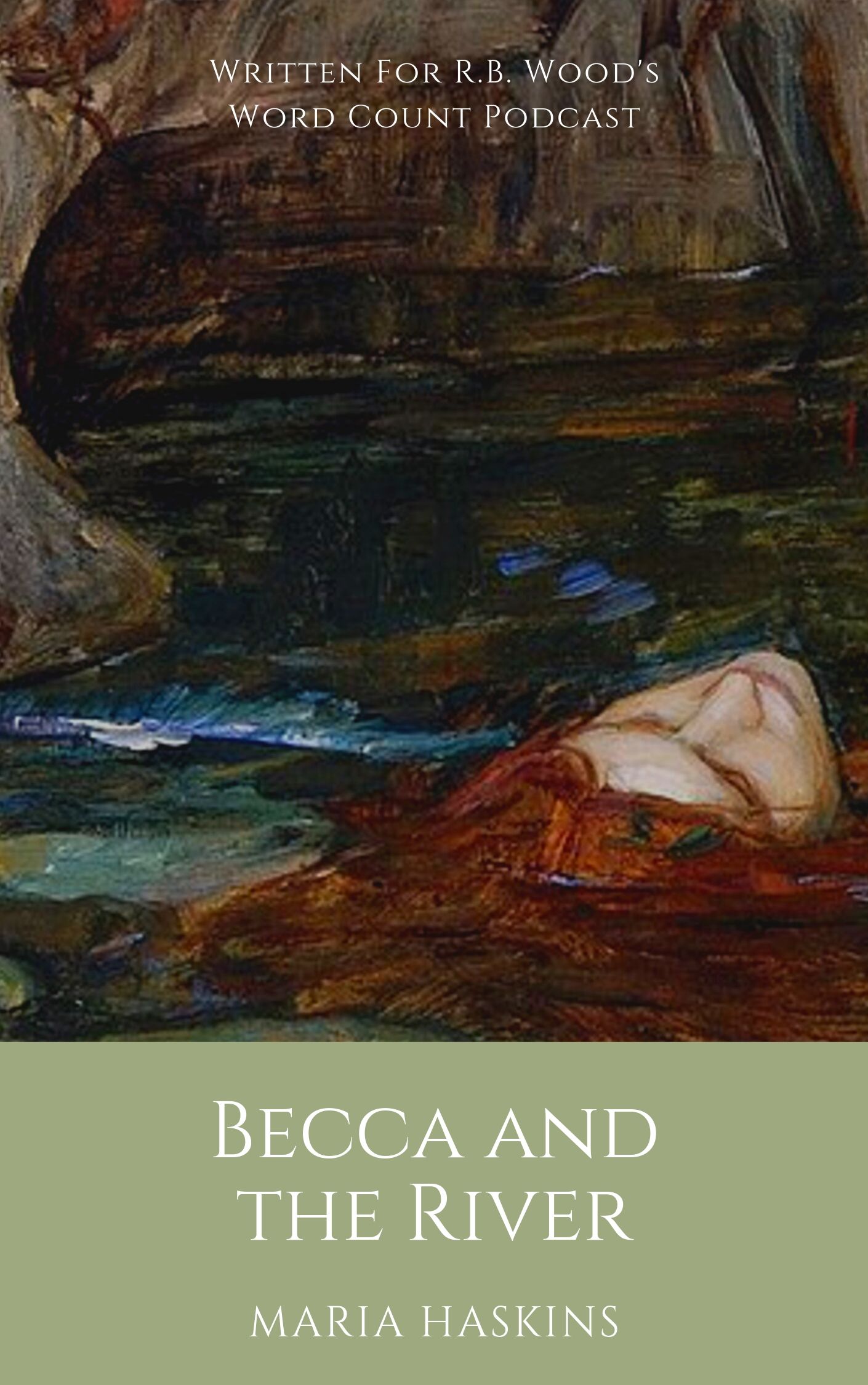 From the author: A love story.

The river falls in love with Becca at first sight. She is four years old and walking the path along the water with her mom, baby brother in the stroller, their dog trailing behind. Mom is busy with the baby and Becca sits down at the water’s edge. She looks at the silvery surface, at the reflection of sky and leaves. There’s a face in the stream that looks almost like her own face, but it ripples over rocks and mud, strands of weeds swaying beneath.

The river’s fingers wiggle back.

Becca picks a dandelion and puts it in the water.

The river takes it, and Becca sees that flash of bright yellow float away toward the bridge. Then it’s gone.

Becca takes off her shoes and puts her feet in the water. The river is cold and moving fast around her toes. She puts her shoes in the water, and the river takes them too. Watching them sink makes Becca giggle.

Then mom’s there, pulling her away, shouting, and after that they don’t go back to the path by the river for months. Still, every time they walk across the bridge, Becca drops a flower or a stick into the water. From the railing, Becca wiggles her fingers, hoping the river can see.

Sometimes, at night, Becca can hear the river in her room.

It murmurs her name.

It says it’s waiting for her.

Becca is 8 when the dog dies.

She runs away from home that day. Runs down the street, all the way to the river. She stands at the water’s edge and screams. No words, just pain. The river listens but doesn’t speak. Becca kneels on the rocks by the water and puts her hands in the stream. The river tugs at her. It says it can carry her away from the town, beyond the highway and all the way to the sea. But only if she wants to.

Becca cups the water in her hands and washes her face. The river tastes the salt and carries it away.

“I’ll be back,” Becca whispers.

Becca is 10 and 11, then 12 and 13, 14 and 15. School is shit and home is worse and everything sucks. No one cares. No one sees her. No one listens. She goes down to the river every day after school. She tells the river everything. The river listens and murmurs back.

One day, she drops her schoolbooks in the stream, watches math and English sink and disappear. Other things end up in the river too. That top she loves that everyone at school laughed at. Chocolate bar wrappers. School pictures. Her grades. The river takes everything. It doesn’t ask any questions. It just listens and takes the things she gives it and keeps them safe.

Becca is 17 the first time she gets drunk at a party. It’s summer and school’s out. A boy says he’ll give her a ride home, but they are not home yet when he stops the car. They kiss, but Becca doesn’t like the way he claws at her breasts, doesn’t like his hand wrapped around her wrist. When she says no, he hits her.

Becca tastes the blood. Then, she tears away from him, gets out of the car, and runs.

On the road near the bridge she trips and falls, skinning her hands and knees.

The river catches her and holds her gently. It loves Becca and doesn’t want to hurt her, but it can’t save her from drowning. It can only rock her, softly, as she sinks.

The river has kept everything Becca threw into the water through the years. The flowers and the leaves, the sticks and the schoolbooks, the shoes and the tears, everything is still there, and now Becca is there too.

As Becca sinks, there is a fluttering moment when she almost wakes.

I don’t want to die, she thinks as the water rushes in, as the darkness comes with it, and the river listens as it always has. It keeps her safe the only way it can.

Tenderly, it lifts off her clothes and skin, picking her apart in whispers. The river knows little of skin and hair. It knows more of scales and teeth, of gills and fins and webbed claws. It loosens the weave of veins and flesh, knitting a new shape onto the bones beneath.

When Becca’s eyes flutter open, she sees fiery fall leaves above, the silvery sheen of the surface between her and the blue sky, branches swaying.

“I’ve got to go home,” she says. “They must be wondering where I went.”

The river tugs at her. It tells her it loves her. That she doesn’t have to leave. That it will take her away, under the bridge, through the town, past the highway, all the way to the sea. But only if she wants to.

Becca thinks of the last things she remembers. The taste of that boy’s mouth when he kissed her. The taste of blood on her tongue when he hit her after she said no. The salt and pain of it.

“I’ll be back,” she says, and the river watches her go.

The river watches Becca clamber out of the stream, dripping wet. It watches the way she uses her new claws to find purchase on the rocks, the way her new scales and sharp teeth gleam in the light.

It watches her go. It waits for her to come back. Wondering what she will bring it this time. 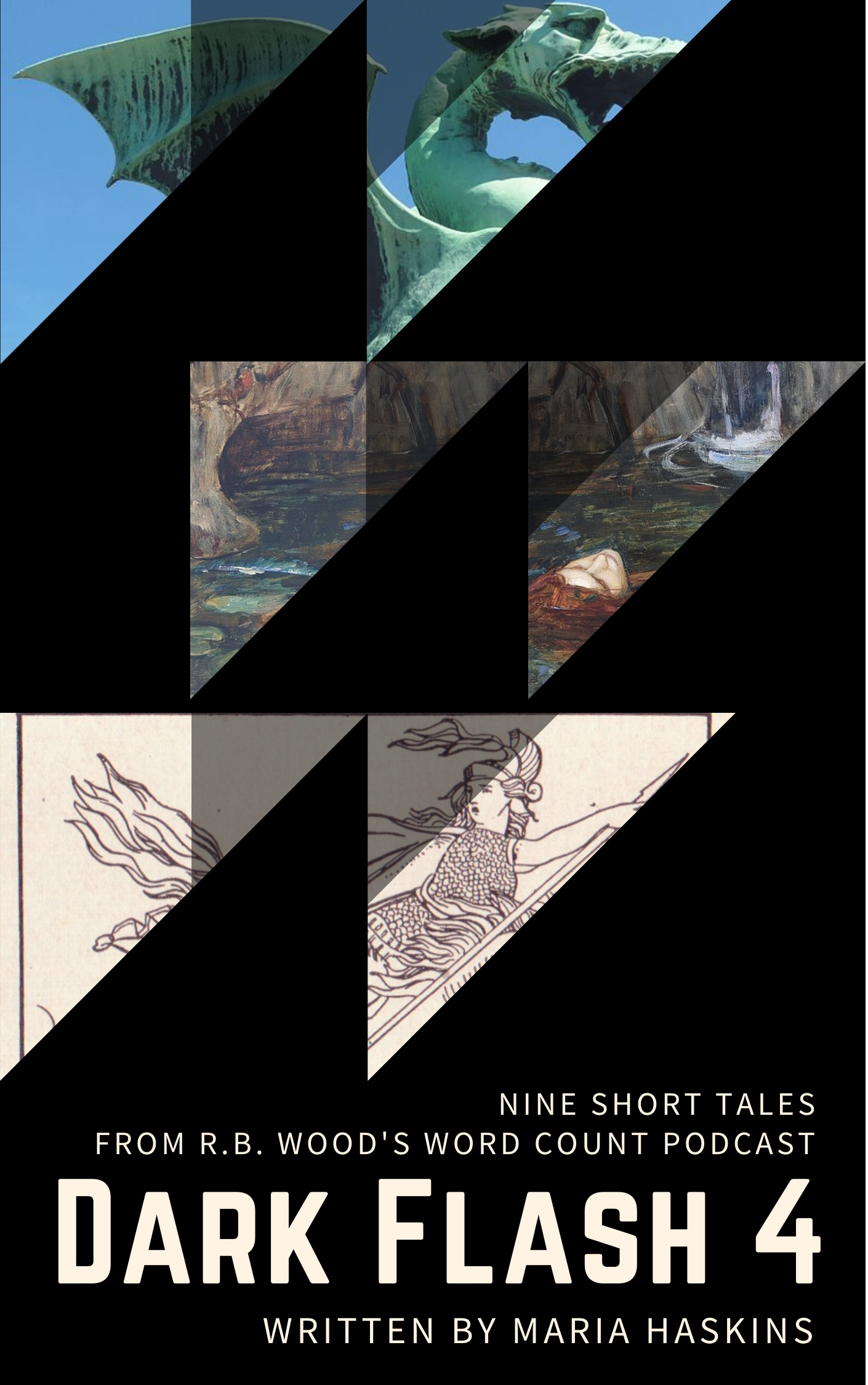 Nine stories of dark fantasy, science fiction, and horror. Featuring shapeshifters, werewolves, ghosts, monsters, dragons, a Valkyrie, and more...there's a bit of everything in this collection of flash fiction! All nine stories originally appeared on R.B. Wood's Word Count Podcast in 2019.