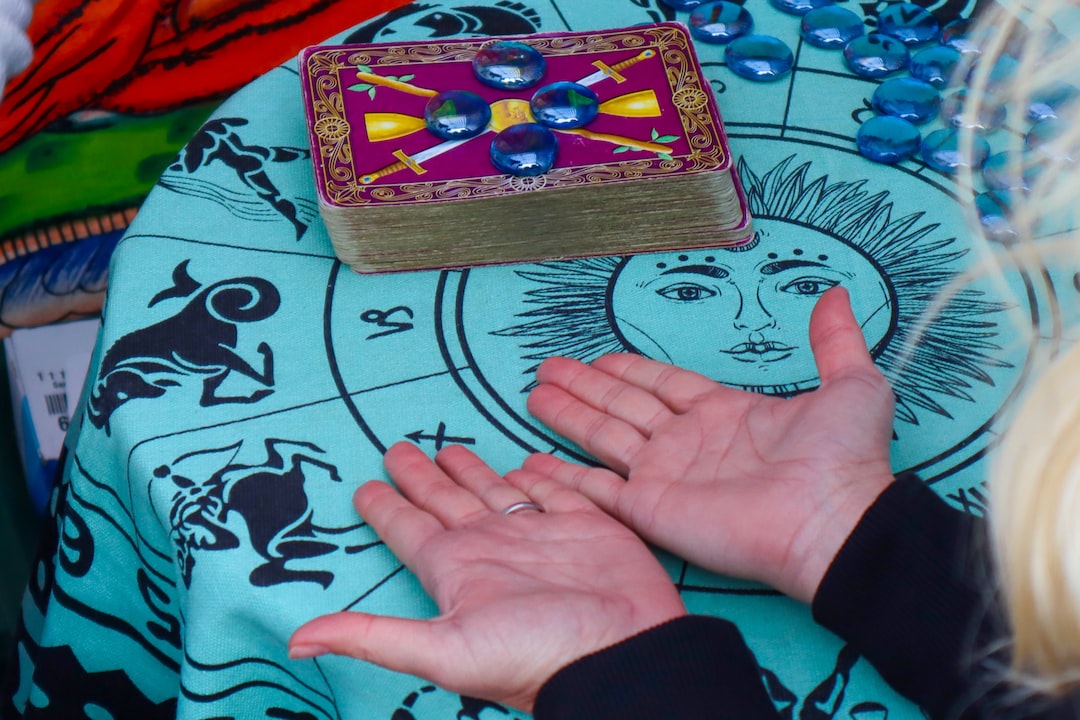 Photo by Shreyas shah via Unsplash.

From the author: A short story about generous donations and the multitude of old ways to tell the future.

“I don’t trust ‘em,” Simon said as they wandered down the alley of tents, lights and screams streaking the night around them. It had just tipped into the end of twilight, that dimming darkness that promised relief from the heat of the day, fun lurking in the shadows.

“Who?” Lucy asked, stuffing candyfloss into her mouth. They’d existed off fried food and sugar all day, no point in changing that now.

“The folk in these shows.”

“Why?” Lucy asked, inhaling the smell of engine grease and trampled grass.

“The whole moving around every few weeks, that’s got to do something to your head.”

“Like let you see more than just your dust-ass town?”

“Shut up, you brat,” Simon said, laughing as she stuck her tongue out at him. “Seriously though, must be weird.”

“I think it’d be good to see new places. Not having to stick around to see people getting petty, or old.”

“How would you know, been in many shows?” a rich voice cut through their bickering. A tall woman was leaning against the support bar of one tent, smoking a roll up out of the side of an overlined smile. She was tall, past six foot, wearing lime green and purple dungarees paired with a stained, mustard yellow vest. Lucy gulped, biting her lip as she looked the woman over. She had strong features: a Roman nose and wide, red painted lips.

“Down, girl,” Simon said, tapping under her chin to closer her mouth. “No, not been in any,” he said, turning back to the woman. Her face wasn’t quite chalk white but there must have been something on it, the skin pallid, and her eyes sported a massive cats eye flick with purple and blue glitter over the lids.

“You don’t look like you’ve had time on the road,” she said, smirking back at him, “Too green for much mileage. Your pretty friend, though…” She trailed off, winking at Lucy, who blushed crimson.

“She’s not been around much either,” Simon said, nudging Lucy.

“I’d love to, but travel’s so expensive,” Lucy said, glancing up at the lady, “I’ve got to pay off school first.”

“Come work with us,” the woman said, nodding into the dark tent, “Tell fortunes, travel for free.”

“You’re a fortune teller?” Simon asked with a barked laugh.

“No, I’m a performer, but the tent has a quick turnover. Something about peering through the veil prompts death.”

“Well if you will go poking around with the fates,” Lucy said, chewing her lip again, “What’s your name?”

“I’m Karlin,” she said, holding a hand out, “Promise to protect you from anything spooky.”

“Thanks, I’m Lucy, this is Simon,” Lucy said, shaking her hand. Simon did the same.

“You perform, you said?” he asked.

“Magic,” Karlin said, plucking a rose out from behind her back and passing it to Lucy. “And a bit of illusionism.” She clicked her fingers and a puff of purple sparks sprang up, fizzling in the air.

“Neat trick,” Simon agreed, frowning, “I’ve done a bit of stuff like that but that’s way above my level.”

“I should hope so, I’ve been doing it longer,” Karlin said, dropping her cigarette and grinding it under her boot. “Want to come and have a look?”

“That could be quite cool,” Lucy said, looking over at Simon, “Fancy it?”

They were led into the dimly lit interior, the scent of incense and smoulder thick on the air. The sounds from outside were cut off, the tent an oasis.

“How’d you keep it so warm?” Lucy asked, glancing to the open flap.

“Tricks of the trade,” Karlin said as she showed them to a broad table. It was cluttered with different items: the front row a bag of runes, a stack of playing cards with tarot next to them, a crystal ball sat on a velvet cushion.

“Nice set up.” Simon let out a low whistle, running his finger in front of the decks. “You can read them, can’t you, Lucy?”

“I mean I’ve fiddled around with some. My own usually just remind me I’m being an idiot with money.”

“A good relationship to have with cards,” Karlin said, nodding. “Why don’t you try those?”

“She’s not coming back for them.” Karlin shrugged.

“Dying generally isn’t, but that doesn’t stop the cards being available.”

“Fair point.” Lucy picked up the cards, starting to shuffle them. “You want a spread?”

“Do me a three, if you know the form?” Karlin asked, stepping closer and nudging Simon out of the way. He stepped back, moving around the table to look at the other items instead.

Some of these bits were ancient looking – a rough bowl stained rust red, a short dagger that seemed to match it from the engravings he could see. An ink pen sat beside a short stack of parchment strips, another bowl pale with ash snug next to them. A set of dark bones, yellow and slick from use sat in a pile, a circle of braided rope enclosing them.

“You guys really have a lot of options,” Simon said to himself.

“It pays to be able to offer visitors variety,” Karlin said, suddenly beside him. He jumped, knocking the bones over.

“Sorry, I didn’t see you there,” he said, patting them back into a pile.

“I’m hard to miss,” she said with a wicked grin, teeth flashing in the low light. “See anything you like?”

“I’m not so into this stuff,” he said, shaking his head. “I mean it looks cool, but it’s all hokum, right?”

“I don’t think your friend would agree,” Karlin said, arching a brow at him.

“Where is Lucy?” he asked, glancing up from the table. He hadn’t noticed it going quiet.

“Under the table,” Karlin said with a laugh. Simon hesitated, blinking at her.

He coughed, his throat tight with nerves now. “What have you done to her?”

“Nothing, she just needed to lie down,” Karlin said, shrugging her broad shoulders. “It’s cooler.”

Simon tentatively squatted down, leaning back a little to try to see into the shadows underneath the heavy tablecloth.

Lucy was there, her eyes rolled back in her head and twitching viciously, arms contorting up and smacking down again as she mumbled something.

“Jesus, what’ve you done to her?” he shouted, slipping onto his knees just as a blow clipped into the side of his head. He sprawled sideways, skull ringing, as Karlin landed beside him and grabbed his throat, the dagger from the table in her other hand.

“I’ve not done anything, the fates are deciding if she’ll come with us or not,” Karlin said, teeth bared as she pressed down on him.

“Get off me!” he shouted, wriggling to try and get a leg up to kick her.

“Less noise, little chicken, I need to see if I can get a reading,” she said, using the blade to cut his shirt open, the hot air slick against his skin.

“You said you were a performer,” he wheezed.

“I am, this isn’t what I do for the show. Haruspex training isn’t easy or appealing, you know, it took me a long time.”

“Reading livers? That’s fucking ancient,” he said, yelping when she batted one of his hands away with the blade, nicking into the flesh.

“As am I,” she said, nodding to herself, tapping the metal against a spot just above his stomach. “Been doing it since before the calendar. I really need a clear reading - I hope you don’t drink too much.”

“I’m a student, of course I do,” he hissed, trying to claw at her face. She squeezed his throat until his vision narrowed.

“I’m sure your friend will thank you for the sacrifice.”

With that she shoved the knife quickly through his skin, just below the ribs, and cut a clean line across, then down towards his feet. His stomach lurched in response, then her hands were peeling his flesh back, cold inside his body as she started to feel around. He felt her fingers like a snake within him, coiling and grasping before she was tugging something hefty, the sensation making him bounce off the tent floor. With a wet pop something large exited him just as his stomach turned out, vomit forcing its up his throat.

“There, a perfectly good liver,” Karlin said, giving it a satisfied little slap. “I’ll check it over to ensure your friend is a good fit. Thank you for your donation.”

Simon wanted to tell her to fuck off, but his mouth was full of stomach acid and he couldn’t breathe properly, the air too thick to make it down his throat. He tried to turn, to reach out for Lucy as he started to shake against the cold, but his hands couldn’t find purchase on the slick floor and he fell back, into darkness.