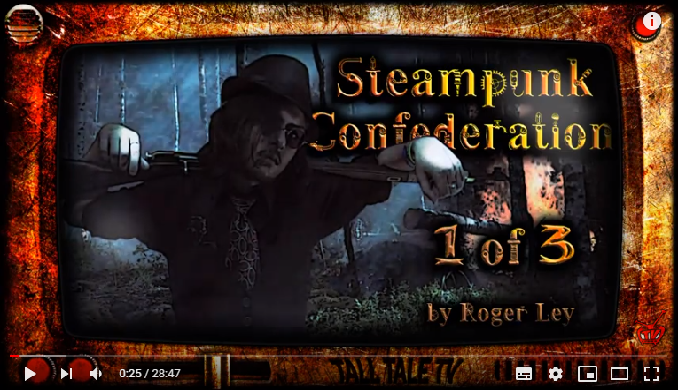 From the author: England and Scotland are at war. The United States has stepped in to keep the peace but plan to make the United Kingdom into the 54th State of The Union. Can Harry Lampeter stop Telford Stephenson from stealing the plans for the English Navy's new Ironclad battleships?

Harry Lampeter knelt by the side of his Norton motorcycle, laid his Lee-Enfield over the saddle, and sighted at the airship as it chuffed past, half a mile away. The musket was a new design with a rifled barrel. His shot hit the airship’s boiler and a jet of steam and water gushed out. The rear propeller slowed and stopped almost at once. The ship was at the mercy of the wind. Its pilot, Telford Stephenson, would have to land and make repairs if he wanted to deliver the stolen Ironclad warship plans to the rebel government in the North. Harry Lampeter, being an agent of the British Government in London, had no intention of letting Telford deliver the plans to Edinburgh.

Telford evidently hadn’t heard the shot over the sound of the steam engine. Lampeter watched as he started the Helium compressors and the airship lost height. He mounted his motorcycle and followed at a safe distance, riding on and off-road as necessary.

A few miles ahead, the airship passed over a farmer walking his ploughing team home. Telford shouted down to him, then threw out a rope. Lampeter watched as he spoke to the farmer, then lowered down a sack of what had to be salt or sugar, currency these days. The farmer hitched the rope to the team of horses and they hauled the airship towards the farmhouse, visible in the valley below them. Half an hour later Lampeter saw Telford securing the dirigible with ropes and pegs near the entrance to the barn, presumably he needed its workshop facilities.

Lampeter found a hill that overlooked the farm, lay down, pulled out his telescope, and kept watch on Telford for the next few hours, as he shaped a copper patch and cleaned the mating surfaces before soldering it onto the boiler. As darkness fell Telford stopped, washed in a horse trough, then knocked on the farmhouse door. The farmer’s wife answered, she was a plump, middle-aged woman, drying her hands on her apron as she gestured him inside.

Seeing his chance, Lampeter walked quietly down the hill, climbed into the airship’s open gondola and searched for the stolen Ironclad warship’s plans. He found them rolled up in a leather drawing tube strapped to the pedestal of the ship’s wheel. He had taken them out and stuffed them into the side pocket of his leather riding coat when he felt the barrel of a revolver jabbed roughly into his back.

‘I’ll take them if you don’t mind,’ said Telford, chuckling. ‘You don’t think I could mistake a bullet hole for a blown seam, do you? Besides,’ he held up the lead slug he’d found embedded in his boiler and raised an eyebrow. ‘I’m glad it’s you though Harry, I owe you a favor, since you carried me back over the lines to your field hospital, at the battle of York.’

‘How did you escape?’ asked Lampeter.

‘I didn’t, they patched me up and sent me home as part of a prisoner exchange.’

‘Presumably, you were all sworn not to take part in hostilities again,’ said Lampeter.

Telford shrugged, he stepped back, keeping the revolver aimed steadily at his prisoner’s midriff.

‘Turn around and put these on,’ he said as he threw over a pair of handcuffs. ‘You can sleep in the barn; the farmer will release you in the morning.’ He gestured with the gun and Lampeter walked through the large open doors. Telford roped his handcuffs to a beam above his head, it wouldn’t be a comfortable night.

In the morning he could hear Telford fussing with the airship’s boiler and getting up steam. There was a conversation between him and the farmer, then the chuffing of the airship’s engine slowly receded as it gained height. The farmer came in and unlocked the cuffs. Lampeter walked out of the barn rubbing life back into his wrists and looked up at the airship. At about a thousand feet, the aneroid triggers fired the charges he’d planted. The two rear support ropes parted, and the gondola fell from a horizontal to a vertical configuration. He could see Telford clinging to the wheel for dear life, his legs dangling and kicking, his top hat falling.

The engine and boiler ripped free and fell towards the ground, there was a satisfyingly large steam explosion as they hit. The airship, freed from much of its ballast, began a rapid ascent towards the stratosphere. Lampeter could hear Telford’s screams and wondered if he would use his parachute or regain control before he reached fifteen thousand feet, the asphyxiation limit. Telford wasn’t a bad sort. As youngsters, they’d both been scholars at the Royal Hospital Naval Academy, near Ipswich. They’d played on the same Rugby team and there had been a certain amount of mutual experimentation in the showers. Anyway, Lampeter didn’t want him dead. It was part of the London Government’s plan that Harry retrieve the original drawings and substitute counterfeits for delivery to the Northern Alliance. The ones he had handed to Telford specified an increase in the thickness of the armor plating that would leave the Ironclad battleship top heavy. It would almost certainly capsize when they launched it from the slipway of whichever Govan shipyard it was built in. He looked forward to reading about it in the Telegraph in about two years’ time. He imagined a Daguerreotype image of the ship lying across the Clyde, rendering the river unnavigable. That would give the Celtic allies something to think about.

Lampeter patted the pocket of his coat and felt the wad of original plans safely deposited where he’d hidden them just before Telford captured him.

Telford’s top hat, complete with leather driving goggles, fell at his feet. He reached down, picked it up, examined it for damage and, finding none, placed it on his head, giving it a cheery pat.

‘You’ll be wantin’ your breakfast then, supposin’ ye can pay for it,’ said the farmer.

‘No thanks old chum, I’ll have it at my club,’ said Lampeter as he strode off, bell-bottom trousers flapping.

A few minutes later, the farmer heard a motorcycle start. He saw it set off on the London road, the stranger’s long hair trailed out behind him, he was wearing the hat and goggles. The hat blew off, and the farmer made a note to retrieve it later. 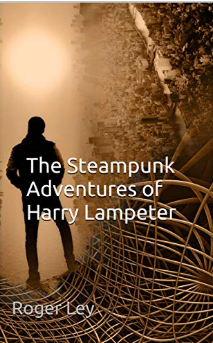 The Steampunk Adventures of Harry Lampeter

Urban anarchist Harry Lampeter is employed by MI6 on a casual basis. Modern technology has collapsed, returning the world to the steam age. The war between Scotland and England, is on hold while the United States army of occupation keeps the peace. The Americans are in no hurry to leave, they plan to make Great Britain the 54th State of their Union. Scotland and England eye one another with mistrust and an arms race seems inevitable as the English plan building a fleet of Ironclad warships.

Roger Ley writes in a variety of speculative genres from magic to time travel and back again.